That's 'DOCTOR MOM' by the way, and 'LADS' as in British Lad's magazines (a weak rendering in North American terms might be "its a guy thing" - a stronger rendering would be that Connie Kaldor song about "Jerks" .)

I have tried out various names for what I am now calling Doctor Mom's penicillin: pragmatic penicillin, patients' penicillin --- all share a common drive - to save lives , now.

The goal here is "who can get 100% pure, stable, colorless penicillin crystals first - dam the poor yield and dam the poor patients, forget that there is a War on."

(And by the way I almost never call it "penicillin" when I am thinking about it or even when I talk about it - I call it simply
"PEN" rather as the British chemists called their reports, the PEN reports, and just as the paper tags on patients undergoing penicillin treatment during the war were also labelled PEN.) 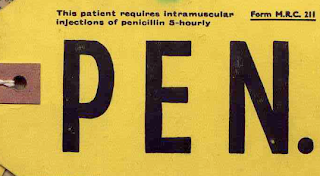 (Yellowcake uranium (easily mistaken for early dried penicillin powder or dried mustard) together with the wartime 'products' derived from it, were also given prominent labels with black letters and symbols on a bright mustard yellow background.)
Mom's pen is expressed in a ratio of units of penicillin actually ready for use in human patients over a period of time.
As in :"Pfizer released 500 mg of dry penicillin, (the famous Lot #696) assaying at 50 units a mg, for Dawson to use on his patients in March 2nd 1942 - a total of 25,000 units of therapeutic penicillin."
Or : "Starting in October 1941,Pfizer released to Dawson a 5 gallon carboy of non-concentrated penicillin juice every week, the juice assayed at an average of 2 units a ml, so if injected immediately into a patient in the form of a drip IV, that was 160,000 units of therapeutic penicillin a month ."
Lads' penicillin can be found described - ad nausem - throughout almost any account about penicillin.
Its boastful vagueness stands in for the most basic of basic arithmetic.
Here is one example, picked at random from the recent book on early penicillin:
We are told that the Royal Navy set up a 'small' production unit in 1942. Even if you follow the penicillin saga closely, this might be the first time you have read of this effort - it must have been small potatoes.
Apparently not so, for in the very next sentence we are told their weekly production was 200 million units.
To put this in context, Pfizer - the world's largest drug firm and a company you have heard of , said it produced 400,000 units of penicillin in March 1942.
(If you have a good memory, you will recall that not all of this ended up in patients' veins - Dawson seems to have only got 25,000 units and he was Pfizer's only clinician at this point.
Most of this semi-purified dry penicillin was probably destroyed by Pfizer chemists trying to degrade it enough to guess at the building blocks of its assembly by the penicillium.)
In early 1943, it took two months for the entire American pharameutical industry to produce as much penicillin as the Royal Navy's little operation at Clevedon produced in a week.
Count me more skeptical of this story than Robert Bud is.
Another example, from Macfarlane's biography of Howard Florey.
It is the claim that production at Oxford had been 500 litres a week for a few months by January 1941.
Posted by Michael Marshall at Thursday, September 02, 2010