Roy S Koch "shows me the money" on wartime penicillin 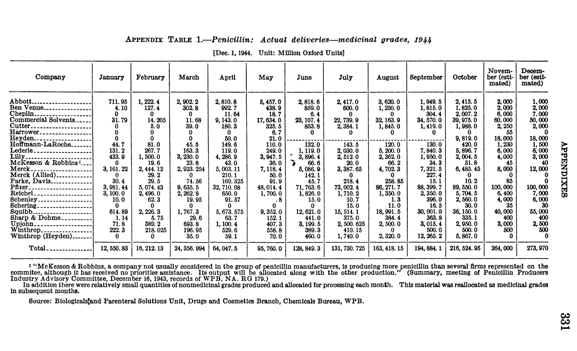 Then , overnight in August 1943, penicillin became one of those parenterally delivered biologicals and nothing was ever quite the same.

One of Koch's jobs was tallying the actual amounts, month by month, firm by firm, of medical grade penicillin that passed from the FDA's approval into the military or civilian supply chain.

In those excited anxious days with American families's sons, brothers and fathers dying left (Pacific) and right (Atlantic) in record numbers, all eyes and ears were on the progress reports on penicillin production.

Everyone, in their own way, was pitching in to help American industry finally deliver the goods, 15 years later but better late than never.

Above all the American taxpayer was working overtime to pay for that promise of expanded production.

Paying for the government building of private-firm-run buildings, paying through extra personal taxes for the shortfall caused by the writing off of excess corporate taxes, paying for military and civilian expeditors, paying to aid to university researchers who were in turn aiding corporate coffers - on  and on and on.

So a corporate failure to make good on a public promise to deliver a lot of penicillin, with the help of lots of taxpayers' money, was going to seem tantamount to committing an act of treason.

Hence Koch's carefully collected figures had to remain a closely guarded secret : American corporations may fail to deliver all the time, but the American public is never ever to know.

But in 1958, about 55 years ago and almost 15 years after the figures were first collected, a muckraking US government inquiry into price-fixing in the antibiotic business did reveal the figures --- even put it in a public domain documents so all the world could quote them freely.

But I have never seen anyone do so and I have read an awful lot on wartime penicillin : so if I am wrong, please email me at my email on this blog.

Anyway, the figures are posted above and you can access the report  ("Economic Report on Antibiotics Manufacture" )  online --- this chart is from the appendix, page 331.

In January 1944, the Hare side of the race to make - and define - wartime penicillin was feeling pretty good : Merck had produced some actual therapeutically-effective penicillin by human synthesis (take that you nasty mold !), a result soon confirmed by the Oxford Hares and by other American Hares.

Yields were much lower than the mold-made penicillin and the impurities both more abundant and much more lethal than in the naturally-made penicillin , but the chemists (hundreds of the best chemists in the world) were working on it.

Soon the pesky Tortoises of  wartime penicillin, mostly obscure johnnies come lately, could be kissed off - their brand new plants just so yesterday, so very obsolete : growing mold like some rural farmer and then making things by fermentation.

In this Modern Age !

Still, in January 1944, some of the leaders in the secret effort to make penicillin by synthesis are still putting up a good front in aiding the build-up of penicillin supplies for the widely expected opening of the Second Front (D-day) in the late spring or early summer.

Their production of natural penicillin was quite good - compared to even a few months earlier.

The all-mighty Merck (leader, along with Howard Florey in Oxford England, of the penicillin Hares) delivered 3.1 billion units that month, about as much as some obscure mushroom farmer (Reichel) did , buried somewhere out in the backwoods of rural Pennsylvania.

Merck wasn't going to really go all out to produce a lot of natural penicillin for the boys overseas, not when they were about to blow the world away with their very own "technically sweet" synthetic penicillin.

But the boss, George W Merck, was still determined to be patriotic none the less, "do his bit".

Squibb ,the third of that triad, was not pulling its weight - even the War Production Board could barely contain their anger , as the folks at Squibb laying back on the oars --- producing just .61 billion units.

Synthetic penicillin yields are still so low that they were a joke - making even Fleming's small amounts that he produced in 1928 look enormous in comparison.

But almost everyone's natural penicillin output has improved --- it was getting close, after all, to make the deadline to get into the pipeline to Kansas City's big depot and then out again to Southern England for the D-Day medical supply loadings.

Every drug CEO wanted to boast later in ads that it was his firm's penicillin that had won the day in the invasion of Nazi Europe.

Reichel had fallen way back below its January output and Merck hadn't even doubled its output.

But Squibb had increased its supply by 10 times , albeit from a low base and Abbott had done almost as well.

(Commercial Solvents had increased its output by 300 times, from a very low base - but it was a real newcomer.)

But Pfizer wasn't playing fair, for it had turned from being a Hare into a Tortoise : it had increased its natural penicillin output by 10 times, from a very high base and doubled it again in May : producing more than the entire world's penicillin plants combined.

Still no early sign of synthetic penicillin production and Pfizer was on its way to producing enough penicillin for the entire world,naturally, with or without Merck's 'technically sweet" synthetic stuff .

Modernity had just taken a fatal shot to the base of the neck and deep down, everyone knew it....
Posted by Michael Marshall at Wednesday, January 16, 2013