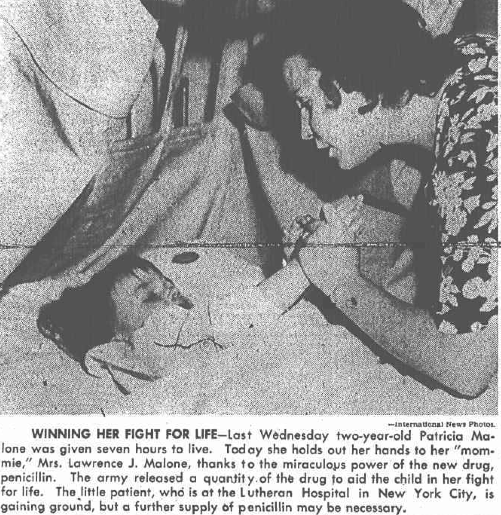 In earlier posts I had mentioned that "The Penicillin Baby", little two year old Patty Malone, whose fight against a fatal staph disease had gripped all of North America for six weeks between August 12th and September 22nd 1943, had finally died of her disease in mid September 1943.

But perhaps it isn't true.
This "claim" was based on a secondary report on her story, in an official history of the Pulitzer Prize, and from what I could find ( and not find) in newspapers from that time that are on Google when I looked.

(The newspaper and editor who had got the life-saving penicillin for her from a heartless American government had won a Pulitzer for their efforts.)

I usually search about every two months as new newspapers get digitalized and get put on the Net, while other newspapers disappear off the Net.

Today I found two stories - from tiny obscure rural newspapers  (actually a good sign - meaning it was wire copy and available to all) with a photo, both from AP.

They showed that Patty was released, fit and well, to her parents Lawrence J and Katherine M Malone on September 22nd after a six week stay at Lutheran hospital in New York.

I say fit and well because the text says so and the image of little Patricia in her cute new bonnet proves it - we also have earlier photos when she was very near death to show the distinct difference.

Emboldened by all this --- and the fact that I now had the mother's middle initial ---- I went back to the 1940 federal census in America to look real hard.

Ironically, I finally had to put less in , rather than more, and I found in 1940 a Lawrence and Katherine Malone at their exact 1943 address (apartment 1c) (83 -11 34th Avenue in Jackson Heights, Flushing, Queens, New York), the one mentioned  in many newspaper stories of the time.

(This mania for disclosing exact full names and exact full addresses was a style of many newspapers back then.)

Age and occupation matched their appearance in the 1943 photos.

(The census showed he had a few years of college, was an insurance adjuster and made a good salary of $3200 in 1940.)

They had a daughter, Jean, born in 1937. Katherine (M) Malone, the stay-at-home mother was the informant, so this had to be accurate - besides the handwritten information of the census taker was extremely neat and readable.

But a telephone number database showed a John M Malone, born about 1939 , living at the 1943 Malone address fairly recently.

If Lawrence's middle name was John, statistically more than moderately likely, then he might well name a son John.

His same telephone number was earlier held by Lawrence J Malone and Katherine M Malone living at that same address !

I tried a search in the US Social Security death registry ( a list of all people who worked for pay and so paid into the system and were alive and working after 1960, when the data started getting put into a computer database.)

Lawrence J Malone was born in New York 1910 and was also raised in New York , as was his wife. But the names and dates on record for New York were all for men born much later than that.

A search for a John M Malone on the death index found nothing - he might well still be alive, as could Jean and Patricia - the average birth date of many Americans dying today is some time in the 1920s, not in the late 1930s and early 1940s.

I will push on and search harder, but for now a nice photo of the bonneted baby Patricia, September 22nd 1943, obtained from a small town rural weekly in Texas.

Yes, a New York story, published even in the tiny town of Mexia Texas.

Because this was a Good News Story that every parent and grandparent in North America kept a moist eye on, particularly at the height of all the death and destruction of the Bad News War....