Hobby finally gets her due

Today the best known member, at least among the general public, of the tiny Columbia University team that did the most to bring penicillin to the public as soon as possible (and did so over Columbia's dead body) is Gladys Hobby.

It is a fame she never enjoyed while still active in antibiotics.

The terminally ill Henry Dawson gets most of the credit for providing the moral energy and drive to the Columbia penicillin effort - something that Hobby and Meyer were always forthright in reminding people.

The fourth member ,Eleanor Evelyn Chaffee (aka Mrs Eleanor Hahnel?), will emerge from the shadows, if it is the very last thing I do.

Thomas Hunter first saw fame for finishing Dawson's proof that penicillin could cure the incurable - SBE. Then he became a medical school dean best known for promoting medical education in the third world.

The fairy godfather of the team, Floyd Odlum, is probably best known today for displacing Howard Hughes at RKO.

Miriam Olmstead is today best known as a former girlfriend of the Rocket man, not Elton John, but rather Robert Goddard.

There were a few others, not as invisible as Chaffee ,but rarely connected today to this pioneering penicillin effort.

Hobby after penicillin went on to discover and prove up other big antibiotics and then take leadership roles in science organizations when few women were permitted to do so.

As a result we get many bare bones bios of her - celebrating what she did but not why.

The best - by far - of these is Elizabeth Moot O'Hern's "WOMEN SCIENTISTS" .

It is based on a 1977 interview with Hobby and includes some rare photos of Hobby - most other accounts re-cycle the photograph of Hobby shepherding Fleming about on his tour of South America.

{{What I really want is a photo of Hobby without her pearls - she always wore them - particularly at work in the lab - she was someone that people of my mother's generation would call a 'looker' because of her sharp dress and make-up.


Perhaps this was a survival technique for daring to work above her station  in a very male-dominated world.

But those pearls ----I bet the woman wore them in the bath and to bed !

Perhaps not to church though - a true 'old skool' Presbyterian...}}

But O'Hern's admirable account fails to explain the 'why' in Hobby's four year struggle to bring penicillin to the public, over the opposition of many powerful forces.

I think Professor Jeremy Greene, from Harvard's History of Science Department, does a great job with the 'why' in his brief bio of Hobby in "NOTABLE AMERICAN WOMEN" edited by Susan Ware et al.

He focuses on her very first articles to explain how she came to hold a unique bridge role between the biological and chemical approaches to defeating bacterial infections.

Greene says she defends the validity of studying non-pathogenic bacteria .

Dawson's entire career - again opposed to his day job - was also devoted to exploring non- pathogens and pathogens as equally interesting and equally viable ways for commensal bacteria to survive in the human body.

This bonded Hobby to Dawson. 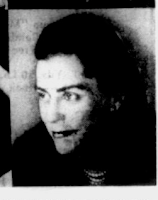 A deep commitment to seeing new research put to work saving lives, even if it hadn't been all explained in scientific terms, was what bonded Meyer to Hobby.

Meyer was the rarest of 1930s biochemists - he was clinically oriented.... aka he was face to face people-oriented.

Dawson's team was very small and not well supported by his university --- but having two such unusual people to work with him (Hobby and Meyer) helped make up for this....
Posted by Michael Marshall at Friday, August 20, 2010