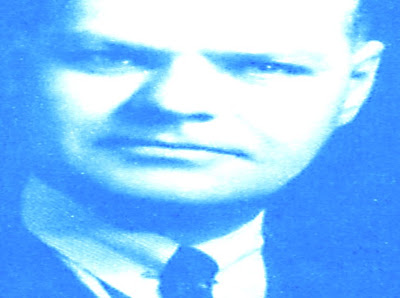 MARTIN HENRY DAWSON 1896-1945
When harmless tiny bacteria called S. pneumococcus living peacefully in your throat get blown the equivalent of 1000 miles deep into our lungs - they panic.
Who won't?
More fatally, so does our body's immune system.
Like a latter day 'Bomber Harris', the immune system 'area bombs' our lungs - too often the collateral damage is us.
S. pyrogenes bacteria is so used to surviving in us, its only home on Earth, that it begins to look like us - and when our immune system overreacts to a case of strep throat, it might start attacking our heart tissue instead of the long since defeated strep throat : the result is often- fatal acute Rheumatic fever.
Lucky you, you've survived a couple of attacks of Rheumatic fever - except for a scared
heart valve ---- a valve messed up by your own immune system.
Now you've neglected your teeth and gums a little and the gums tend to bleed when you do brush them.
This allows some harmless S. viridans (green strep - the bacteria that makes unbrushed teeth look ,well, sort of green - not actually the reason they are called green strep but a colorful coincidence !) to get into the blood stream and start whirling around your body much faster than the Space Shuttle does with us.
Naturally the green strep panic and start looking for a new safe home before giant white blood cells swallow them for dinner.
All these bacteria can't move - they are basically tiny blogs of jelly who can stick to particular types of human cells, if they have the right kind of adhesive on their surface for that kind of cell and they happen to bump into it and not the wrong sort of cell.
Its all a lot of hapstance.
Hardly your usual predators, right??
Usually, the green strep gets eaten before it makes that safe haven. But for people with scared heart valves, the scar tissue (produced by our immune system - remember ?) is
just the sort of thing that could be that safe haven.
If they make it into these scar areas' depths, while whirling past at space-travel-like speeds, they attach themselves to the scars.
The immune system reacts by creating more scar tissue, which inadvertently prevents white blood cells from getting in and at the green strep.
The green strep start re-creating dental plaque (and tartar) right on the heart valve - taking a biofilm meant for our mouth and teeth and replicating in not too dissimilar circumstances at the heart valve.
A normal biofilm colony eventually lets loose bits of itself in the liquid swirling over it to form mini colonies elsewhere - the green strep on the heart valve do the same.
We call those particular mini colonies 'embolus showers' and if and when they reach a heart/ lung or brain blood vessel with a restricted passage, they will block it and kill us.
Explaining and preventing or curing these three serious/common/fatal diseases was to be Martin Henry Dawson's lifework.
In a sense, he succeeded well beyond his expectations and changed our world , for the better, for ever.
All three dieases are the unexpected side effects of us and our fellow commensals scrambling to adjust to a micro change in our body's environment.
Just as global warming today is making all of the world's commensals scramble to adjust to a macro change in our environment.....
@arcadianrecord
Posted by Michael Marshall at Monday, June 07, 2010