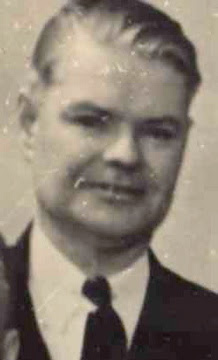 Martin Henry Dawson 1942 - suffering from terminal Myastenia Gravis
From the 1920s till the 1950s, Martin Henry Dawson published more articles and made more public presentations on Horizontal Gene Transfer (HGT) than any other scientist - in fact more than all of them combined -- quite simply 'No Dawson, No DNA'.
But he died, tragically young, in 1945, though not before seeing through three different projects that involved HGT - though he was probably only convinced that HGT was involved in the first.
Not to say he didn't have strong personal suspicions in the other two cases - but it seemed too wild to be prudent to talk about publicly.
S. pneumoniae are detected and eaten by our adaptive immune system based on the the more than 90 different goo capsules that surround each of the 90 different strains of s. pneumoniae bacteria.
One way to survive being eaten is to quickly and randomly change your 'cap' - or not wear one at all.
Dawson with Sia and Warbasse, between 1928 - 1933, showed this to be done by biofilm colonies (it can only happen in close-quartered biofilm colonies, not in widespread thin populations of planktonic bacteria) by the bacteria taking a vote by exchanging chemical emails (Quorum-sensing/ aka Q-sensing) and then agreeing to exchange the DNA genes needed to change capsules.
By 1934, Dawson had become interested in the capsules of s. pyrogenes, mostly because they were NOT of interest to our adaptive immune system !
He discovered this is because they were made up of something the human body needs to use like wampum - Hyaluronan - the same stuff injected into wrinkles to restore their cosmetic youthfulness !
Our immune cells see this stuff in use everywhere in the body in dozens of different situations - it screams "self" like nothing else - so they leave it alone.
But only 6 species of bacteria make this goo - it is an energy intensive process and if it didn't get used to protect our commensal bacteria from attack of the white blood cells whenever they venture into the blood stream, it would only become a fatal burden to make.
Evidence is strong that these few bacteria borrowed the basic technique & the genes to make it from some animal host a long time ago (HGT between animals and bacteria does occur) and adapted it to suit themselves.
Since the s. pyrogenes are our single deadliest killer bacteria and this capsule a crucial means for them being able to do their work inside us and survive, this shows again what HGT means to us, in highly practical terms - it can kill us.
Finally, Dawson successfully cured the deadliest common heart disease of his day - SBE, endocarditis caused by green strep , s. viridans - normally harmless long term residents of our mouth.
He did so, starting 70 years ago this October 16th, with penicillin.
Penicillin is merely the best known of a very large family of antibiotics that still are our major life-savers - the beta lactams.
Most are made by bacteria and effectively force other bacteria to give the producers a wide berth.
Because only a few fungi make beta lactams compared to many bacteria, because the fungi's penicillin gene cluster looks to be so close to all the bacteria beta lactam creating structures, and because bacteria were here well before fungi, most experts feel that HGT was the means for the penicillin-making genes going from bacteria to fungi and then into us as an life-saving medicine.
But bacteria are mostly resistant to penicillin you say.
HGT again - the cluster of genes of resistance to penicillin existed long before Dawson put penicillin to work as an antibiotic in 1940.
When it became needed for bacteria to survive, they rapidly spreading it about around the world - by HGT ....
@arcadianrecord
Posted by Michael Marshall at Monday, June 07, 2010