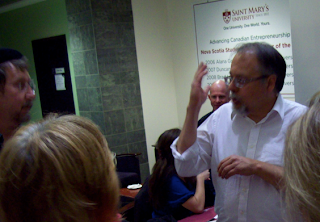 HALIFAX - Andrew Nikiforuk told a packed Sobey lecture hall at St Mary's University (SMU) last night that about the worst thing imaginable that could happen to humanity and this planet would be if we suddenly discovered a safe,cheap, abundant source of renewable energy.
This is because it would actually worsen our current addiction to energy slaves, laziness and heartlessness - if only because, this time, we'd kid ourselves that at least our consciences were clear.

Nikiforuk himself seems a fount of natural energy ,winning about as many major -  highly different- awards for writing and advocacy as he has written major - highly different - books and articles on a wide variety of subjects.
May I venture that his latest book, "The Energy of Slaves: Oil and the New Servitude", forthcoming this Fall * and which Andrew previewed for the first time in public at SMU, may vault
him out of the ranks of journalism and into the ranks of public intellectuals.
Appropriate for a lecture delivered at a Catholic University and sponsored - in part - by that university's Philosophy Department and by CCEPA ,(Canadian Centre for Ethics in Public Policy, itself a joint venture of SMU and AST (the Atlantic School of Theology), Nikiforuk referenced the moral impact that slavery has always had upon the masters of those slaves.
In particular, Andrew focused on slave-owning's conversion, in the last two centuries, from something a relatively few families did (with a few dozen slaves each) to something all human families now do with thousands of slaves each.
No longer human slaves (at least not usually in our homes - we prefer to hide them in factories in rural China), instead these are machine-energy slaves, with about the same (lack of) rights as past human slaves.
Powered mostly by Non-Renewable-Modernity's greatest gift to ever-upward progress : fossil fuels, that gift from the past that does not keep on giving.
Current obesity levels and addiction to GPS travel are really nothing new points out Nikiforuk : whenever slaves are abundant,obedient (on pain of painful death) and clever, masters will end up relying upon them for everything but eating and burping.
Sloth neatly combines with a heartlessness to the slaves' continuing existence, as long as the violence of every master society and their armies, can keep bringing in new fresh supplies.
Only when slaves are expensive and in sort supply does their treatment then to improve.
But this depressing picture can be removed, Nikiforuk seemed to argue, if we morally re-embrace useful, healthy physical labour as a positive virtue and return again to the religious injunction against owning any slaves - human, animal or inanimate.
St Benedict walked away from slave-owning and its mindset and set up a worldwide order, fueled this time by the practises of a small remote peasant village where healthy useful work was combining with knowing how to enjoy life, simply, with family and friends.
What our world is waiting for - without even knowing it - says Nikiforuk, quoting approvingly from one of Global Commensality NEWS's favourite thinkers, Alastair MacIntyre, is a new St Benedict....

*At all the biggest - not alway the best - bookstores.